any good? We get asked this question a lot and we always give the same answer. Here’s our Webroot SecureAnywhere Antivirus Review. We always recommend Webroot Antivirus to anyone looking for a simple, strong and lightweight Antivirus. Webroot has grown in popularity recently, especially for home users who want a no-fuss security solution for their devices.

The Setup and Install Process

If I told you there was an Antivirus software available that downloaded in 15 seconds would you believe me? What if I told you that you could have an Antivirus installed and running in under 5 minutes? With Webroot Antivirus you can have both of these things. Checkout our video below which shows the entire install process which includes and inital scan and system optimization.

The average security software takes anywhere from 30 seconds to 5 minutes to start, depending on the age and speed of the device.

Webroot scans are extremely fast. Because the software doesn’t store virus definitions on the device there is no slow scan speeds.

The fact that the Webroot software is so light and doesn’t rely on large files to run means that it does not slow down your system. Some competing products have been known to reduce system performance by up to 30%. Webroot is always our recommendation for students that need Antivirus protection for their college laptops. Mainly because most of the students we speak to simply want an Antivirus that will keep them protected without slowing down their college laptop.

Webroot Antivirus just works. It really is that simple. There is no need to worry about whether or not the latest updates have been installed, whether the scans are working correctly and you won’t need to worry about changing any settings. Webroots ability to detect threats in real time is second-to-none in fact it is consistently rated as the best product available to detect real time threats.

Ransomware Protection – Webroot uses a sophisticated threat detection method that involves monitoring apps and files that run on the system. For each app that runs Webroot marks it as either ‘safe’ , ‘not safe’ or unknown. Naturally the ‘not safe’ apps are blocked. The ‘unknown’ results are monitored by Webroot for a period of time. After monitoring Webroot will deem the app as either safe or not safe. In the case it is marked as ‘not safe’, Webroot will reverse any changes that app made and protect your system. This process is what makes Webroot so great! It protects your system from all types of Malware, including Ransomware.

Kaspersky also offers a cloud based Antivirus product. It is not as small as Webroot and still installs a large amount of tools on your PC, meaning it is still slows down your computer when compared to Webroot.

Other major security vendors such as Bitdefender and Malwarebytes also offer cloud based products, but they are mainly used in corperate environments.

Is There A Free Version?

Webroot does not offer a free version of its product. Some security software brands do offer a basic (and free) version of their products. For example, AVG and Avast are known for offering completely free Antivirus solutions. Webroot does not do this. That doesn’t mean you can’t try Webroot before you buy it. All of Webroot’s products (including Antivirus) are available to trial for free for 14 days (no credit card required).

At just $29.99 per year, Webroot Antivirus is very affordable. There are other products available for similar prices, but most do not include the the speed that Webroot offers.

So, is Webroot SecureAnywhere Antivirus Right For You?

Webroot antivirus is perfect for anyone looking for a simple Antivirus solution. If you are looking for more advanced features or extra licenses check out out top Antivirus picks here. If you just need simple, reliable protection without weighing down your system then Webroot is hard to pass on. A lot of users with older machines are starting to use Webroot simply because it keeps the system running smoothly. 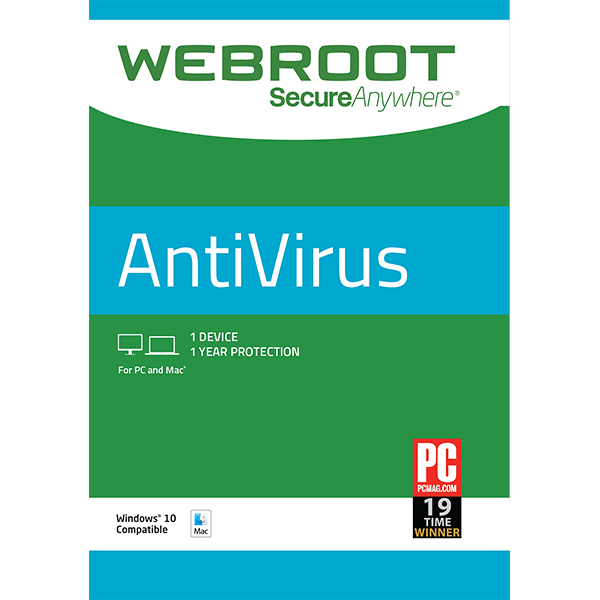 If you like the Webroot product but don’t know if the Antivirus is enough for your needs then we would suggest checking out our review of Webroot Internet Security Complete. Which offers additional features including

Our Trend Micro Maximum Security Review will show you wh